Hello everyone! I thought I should catch you up on our latest news. Let's see...

First, I wanted to assure everyone that we are safe and sound after all the flooding, storms, and tornadoes that you have probably heard went through here. I have never seen flooding like this and feel so much for families that have been affected. It never ceases to amaze me how powerful water can be!

Some not-so-good news...Tom's Dad had a heart attack last weekend. He is doing wonderful now after a stint was put in. A while back, he started changing his diet and exercising due to some blood sugar issues. Thankfully, he has worked hard at that because making those changes probably helped him a lot. He has some more changes to make, but prognosis is good that his heart will repair itself in time. Please pray for him to continue to get better and better. There are 18 grandbabies in Tom's family now, and several of them were very concerned about their Grandad.

Jobs: We have long prayed for God to open a door for a new job for Tom and that has happened. He will be doing basically the same thing, but hopefully his hours will be much shorter, while his pay stays the same too! Also...I had been asking the Lord to help me find a way to work at home. He led me to a transcription company a couple friends work for! I am taking the class now. I'll keep you posted on how it goes, but I loved that part of my schooling in Medical Assisting!

We are winding up our core subjects for the school year now. This summer, we are going to do a study on different regions, such as desserts, grasslands, polar regions...and learn some geograpy, culture differences, and plants and animals that habitate in those places. I find if I don't plan anything, the boys tend to get into trouble!

Alex and Trey had their first baseball practice today. Their team is the Red Sox and their Yankee Daddy isn't thrilled, but he will be away for a month of training for the new job, so he won't have to shout, "Go Sox!" hee hee

Garrison has decided he wants to run. And when I say run...I mean long distance running. (I know...I know...where on earth did he get this passion from???) Saunnie is acting as his coach right now. She is so good for him...helping him with sports stuff and competition....things that never really interested his mom growing up! He is hopefully going to be able to go to a cross-country camp at the end of the month. He also wants us out exercising as a family each night. Boy, is that one way to get a person moving! How can I tell him no??? Seriously, it has been fun, and I am so proud of him. He has been running a mile every night!

All three boys went to stay with my parents last week to attend their church's VBS. The theme was Outrigger Island. They had a blast, and Tom and I enjoyed watching their program on Sunday. We got so many compliments on what sweet and well-behaved boys they are. We were PLEASANTLY SURPRISED! Good to know they can pull it together and behave when they need to...hee hee. Most of all, I was thankful to hear how willing they are to pray in front of others and not be embarrassed to talk to their Lord and Savior! Here are some pics of them there. (You will notice Alex is sporting a mohawk again!) 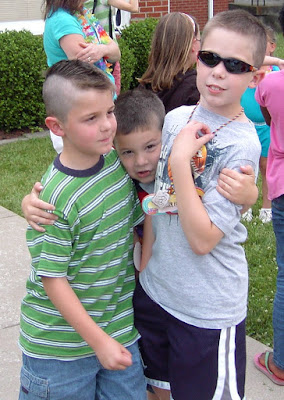 I have to add a special note of thanks to my parents. They are just amazing with my boys. I'm so happy they aren't afraid to take on the challenge of keeping all three of them at one time. It IS hard work, but my boys love to be together! I'm so grateful I have a place where I can send them and know they will be loved on and played with! Here are some pics of my parents. My Mom helped teach, which she is so gifted to do, and my Dad's standard job each year at VBS is kitchen duty. It's just him and the older women, but he does a great job...and doesn't he look cute in his lil straw hat??? 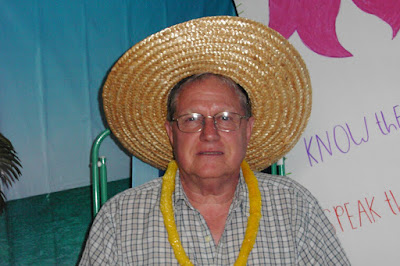 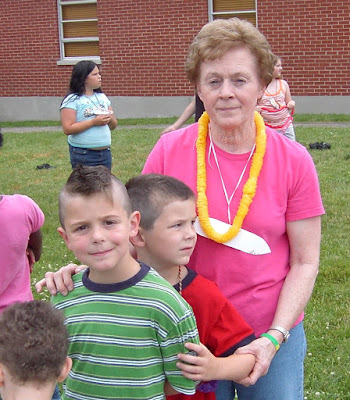 My friend Toni just had one son graduate from college and another from high school. Some of you might remember them from being in my wedding. Their little brother is the cute blonde boy in these pics with my boys. His name is Jamey. We went to the graduation party last weekend. 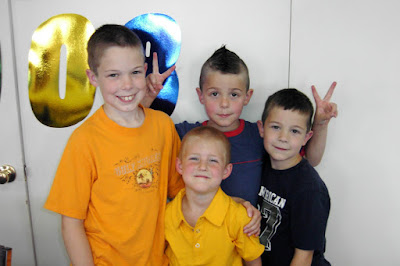 This pic has one of my dearest friend's and her family in it. Trey seemed a little skittish around the girls, scooting away and said he didn't like girls, but when I asked Alex if he like girls, he looked right at Amy and said, "Hot ones!" I couldn't believe him! He knew exactly how to push Aunt Amy's buttons! She said, "Scoot over here Lilly!" It was soooo funny! Then a couple minutes later, Trey picks up his water bottle and dumps it on accident. I was kidding with him and said, "Oh no Trey it looks like you peed your pants!" Alex stands up and yells across the graduation party, "My brothur just peed his pants evwybody!" I wanted to stuff him in a hole! 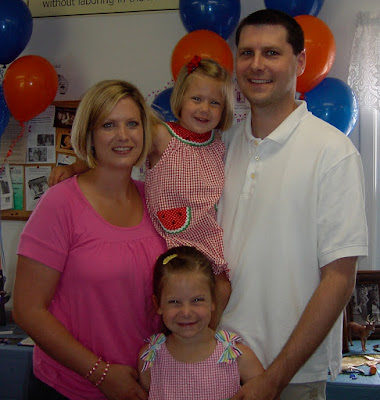 Last things...this week the boys will go back to my parents while Tom and I go on a short trip with some friends to watch the Yankee's play! Tom is, of course, very, very thrilled. I am excited to be with our friends, but I could take or leave the ballgame! It will be fun though!

And, please pray for our little friend Brendon and his family as they take their Make-A-Wish Foundation trip this week. Brendon's wish was to go on a train ride. I think they get to see the Grand Canyon. We pray it is uneventful and calm...a fabulous time for their family!