OUR HOUSE IS SOLD! 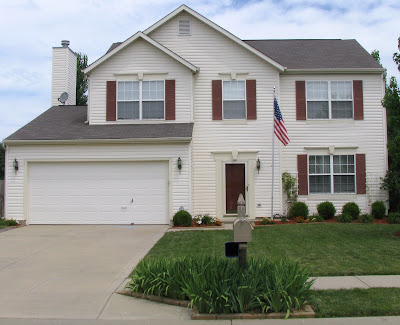 Just five weeks to the day we met with the realtor, we met with her again to sign the papers. We are just amazed! My goodness that was some hard work, but it sure paid off!

After viewing many homes and praying for God's direction, as well as asking Him to close the door on a dream home we found if it wasn't a good thing for us right now...we have decided to buy the home that Tom's brother-in-law, Rob, built.

Rob is so talented and builds his homes very well. For the price he is blessing us with, nothing else compared. God has totally taken care of us and even given us desires of our hearts. We will live on a great street, on a wooded lot, just down the street from Rob and Rebekah. We will have three bedrooms upstairs PLUS a full basement. Garrison and Trey want to share a room for now. Alex wants his own. They will have a bathroom downstairs, as well as a play room and large family room. We are just so thankful for all of it!!!

The funny thing is that the people that bought the home of the people buying our home needed the deal sealed quickly because one of them has to deploy for the military. So...that left us needing to be out of our home by Oct. 5!

I had a few minutes of freak out because at that point we had no clue which house we were to buy. But, something clicked inside me and I thought of how none of this suprised God! Nope, God knew the timetable of everything. He knew when our home would sell. He knew when He would reveal the right home to us. He knew that the boys and I had planned to go to Nashville with Tom for a week...which would leave me only two weeks to pack up our house while homeschooling! BUT, I was flooded with peace that all of it would fall into place.

So, we did go with Tom to Nashville and had a good time. He ended up getting called back early for local work, which was fine with me since keeping 3 energetic boys under control in a hotel room is NOT my idea of relaxation!

It worked out well for us to get back though, as some family and friends needed childcare help. From Hurricane Ike, our area received some strong winds last Sunday. One of Tom's family's friends was killed by a tree limb striking him in the head as he was trying to cut it down. He was 60 years old, seven children and seven grandchildren. Very sad. That same day a 10-year-old boy died the same way here, as well as the girlfriend of a guy I went to school with.

It's all just a lot to take in. I cannot even imagine what it must be like to be close to a hurricane after the winds we saw here. Trees were down everywhere. The kids here are still out of school because of power outages and water problems.

Tomorrow, I may do some painting at the new house and then we will head back north so Garrison can play football Saturday morning. By Oct. 5, I will be back home again. I can't explain how long I have looked forward to this!

Thank you for all the prayers for God's will to be done in our lives! I know this move has surprised several people, including us, but God has shown us in numerous ways now that this is His direction. Some of the steps of this path have been really hard, many of them not understood, but still God knows better than us what is best.

We'll post pictures of the new place as soon as we can!